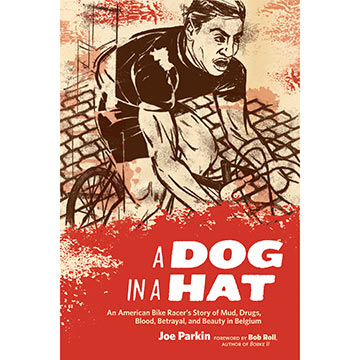 In 1987, cyclist Joe Parkin left the comforts of home to become a bike racer in Belgium, the hardest place in the world to be a bike racer. As one of the first American pros in Europe, Parkin was what the Belgians call “a dog with a hat on” — something familiar, yet decidedly out of place. Parkin's memoir reads like a novel. In plainspoken and fast-paced prose, Parkin describes the true life of the professional bike racer, putting the reader into the whirlwind of this hardest of athletic educations. A Dog in a Hat celebrates the glory of bike racing, but Parkin thrillingly tells the hard reality of the life—the drugs, the payoffs, the betrayals by teammates, the battles with team owners for contracts and money, the endless promises that keep you going, and the rider's sheer physical agony of racing day after day.

I DID TELL JOE PARKIN TO GO TO BELGIUM. I DID NOT, HOWEVER,
tell him to stay.

But Joe stayed so long I began to wonder what the hell ever
happened to him. Then about five years later I saw him coming
toward me on the Schelde canal bike path. Now, you see a lot of
cyclists on the canal, but there is no mistaking a profi for any of
the beer-bellied supporters or even the desperado amateurs. The
profis have an aloofness about their pedaling that shows true
disdain for the wind, rain, or effort needed to propel themselves
down the road. This rider approaching me at warp speed had all
that in spades. he also had the emaciated skeletal silhouette many
profis have. In fact, this dude was a wraith, with the gnarly skinny
that only European pros possess. When the rider slowed and
U-turned in front of me and said, “oy, Bobke,” I thought it was
one of the spooky Flemish pros who had been pulverizing me for
the majority of my adult life.
The rider said, “Jongen, ik ben Joo.”
“huh?” I said.
“Um” (long pause), “um” (longer pause). “It’s Joe Parkin.”
“Holy shit, don’t lie!” I yelled. “Joe! Where have you been?”
“Hier . . . um . . . I’ve been here,” said Joe.
“Whoa, dude, you scared me,” I said.
After much chuckling, Joe explained in a rather cryptic mix
of Flemish pro speak and half-remembered English that he was
making a good living at kermesses, semiclassics, and smaller
stage races.
I said, “Are you insane?”
Joe said, “maybe,” not even half joking.
At this stage in Joe’s career, he was a true Vlaamse-man. Joe
had gotten himself so deep into the fabric of the Flemish pro life,
I feared he might not make it out. But as you can read in this vivid
account of the hardships and triumphs of pro racing in Belgium,
Joe not only survived but thrived in the toughest of all cycling
environments. This is what I saw in Joe when we first met. And
this is what I meant when I advised him to abandon the remedial
form of four-square crit racing that prevailed in the States in the
1980s.

Joe was no longer the rheumatoid doughy tosser type that ruled
Stateside racing in those days. he was an avenging angel of misery
and, best of all, not a starry-eyed regional time trial champ with
delusions of grandeur about to be sent home in a pain-induced
coma after falling asleep in a crosswind battle. No, Joe knew the
score. Joe had become the inside skinny. Joe was a twelve-toothed
assassin.What was it in those bleak landscapes that carved the fat off
Joe’s carcass like vultures around a kill? The weeks, months, and
years of isolation in Belgium? The vicious, epic races that were
virtually unknown by Americans then but are now part of our own
cycling lore? The ancient, semi-illusionary dialect of a downtrodden
people who revere cyclists as beacons of hope and cultural
pride? The food, the dirty deals, the pig-shit toothpaste, the twofaced
team managers, the smoky bars, homicidal teammates, and
demented competitors? All these things and many more that you
will read carved Joe into a missile of sinew, veins, sunken eyes,
narrow shoulders, skinny arms, and huge ass and legs typical of a
survivor of the toughest game on two wheels.
You should count yourself lucky to have stumbled across a
treasure map from the old country of forgotten dreams and buried
riches. In Belgium, bike racing rules, and I am not surprised in the
least that Joe Parkin was a Flemish prince.
I have a rather ominous premonition that many a cycling fan
will take umbrage with the grittier side of our sport that Joe
writes about. If you do, you do not deserve to read this book. For
everyone else, you may now read and be enlightened and entertained by
the most authentic book ever written about making a
two-wheeled living as a pro cyclist in Europe.

VeloPress A Dog in a Hat: An American Bike Racer's Story